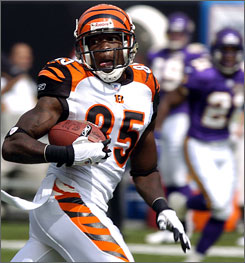 The Cincinnati Bengals welcomed wide receiver Chad Johnson to training camp for the first time Monday morning, according to the Cincinnati Bengals’ website; Johnson didn’t talk to the media after practice, instead running directly to the locker room.  Team head coach Marvin Lewis and offensive coordinator Bob Bratkowski said that they are trying to ease Johnson into the workout routine.

Johnson, for the most part, appeared to split the snaps with fellow wideout Marcus Maxwell; he participated in all of the drills and didn’t appear to be in any pain.  Lewis said that it is a possibility that Johnson could play in the Bengals’ first preseason game against the Green Bay Packers on August 11.

Bengals Looking to Get Off to Fast Start, Challenge the Best in the NFL in 2021

The Cincinnati Bengals 2021 Schedule Has Been Released

Bengals Tweet Out Video Promoting “New Stripes” for Uniforms in 2021